With the blockchain and cryptocurrency markets reaching peak frenzy at the beginning of this year, it is easy to get absorbed in the shorter timeframes and ignore what's happening to the industry as a whole. It's important to take a step back and look at the bigger picture. It's our belief that we are still in the early formative stages of identifying and applying the uses of blockchain technology in the real world.

Blockchain and distributed ledger technology are long-term technology plays, similar to microprocessors, software, and the internet which took more than a decade to move from early experimentation, development, and gradually to real-world adoption. The interesting element of the blockchain space is that while investments fit the profile of early seed stage ventures, for blockchain companies with publicly traded tokens, the liquidity profile companies fit that of more mature companies.

With these contextual points in mind, today, we wish focus on the trends and patterns of the publicly traded token markets. We leveraged data from our friends at Esoteric Capital and the the output below highlights some of the key insights that we believe you may find insightful.

How much you raise really matters.

Based on the analysis below, one can see that the return on investment (ROI)s for projects that have raised between $0–5M have achieved the greatest ROI at 11,342%, followed by projects that raised between $10–20M, having an average ROI of 1,274%. The third fundraising group range is $5–10M, with an average ROI of 319%.
Intuitively, this makes sense, given the arguably excessive capital raises achieved by some ICOs, with 9 of such projects raising more than $100M. The likelihood of the market capitalization to increase decreases the higher the initial hard cap is to begin with. In fact, only about 30 projects (of at least 2000 ICOs) have ever reached a $1B market cap (i.e. a 10x return for a $100m raise). Not only that, a significant chunk of the $1B tokens disproportionately did not ICO (e.g. Monero).

The Price per Token Matters (but it really shouldn't)

Based on the analysis below, we can see that the lower the par value of a token, the greater the return per day. There are many reasons, both rational and irrational, that token price may impact ROI. The main factors which should influence ROI are 1) the implied market cap (e.g. total tokens times token price at ICO, not merely those sold at this time), and 2) the actual value of the project and whether it befits such a capitalization.

Internet of Things, Payments, and Platforms are the top categories

Interestingly enough, many of the poorest performing categories are ones in which many would normally associate as categories that may benefit more from decentralization. 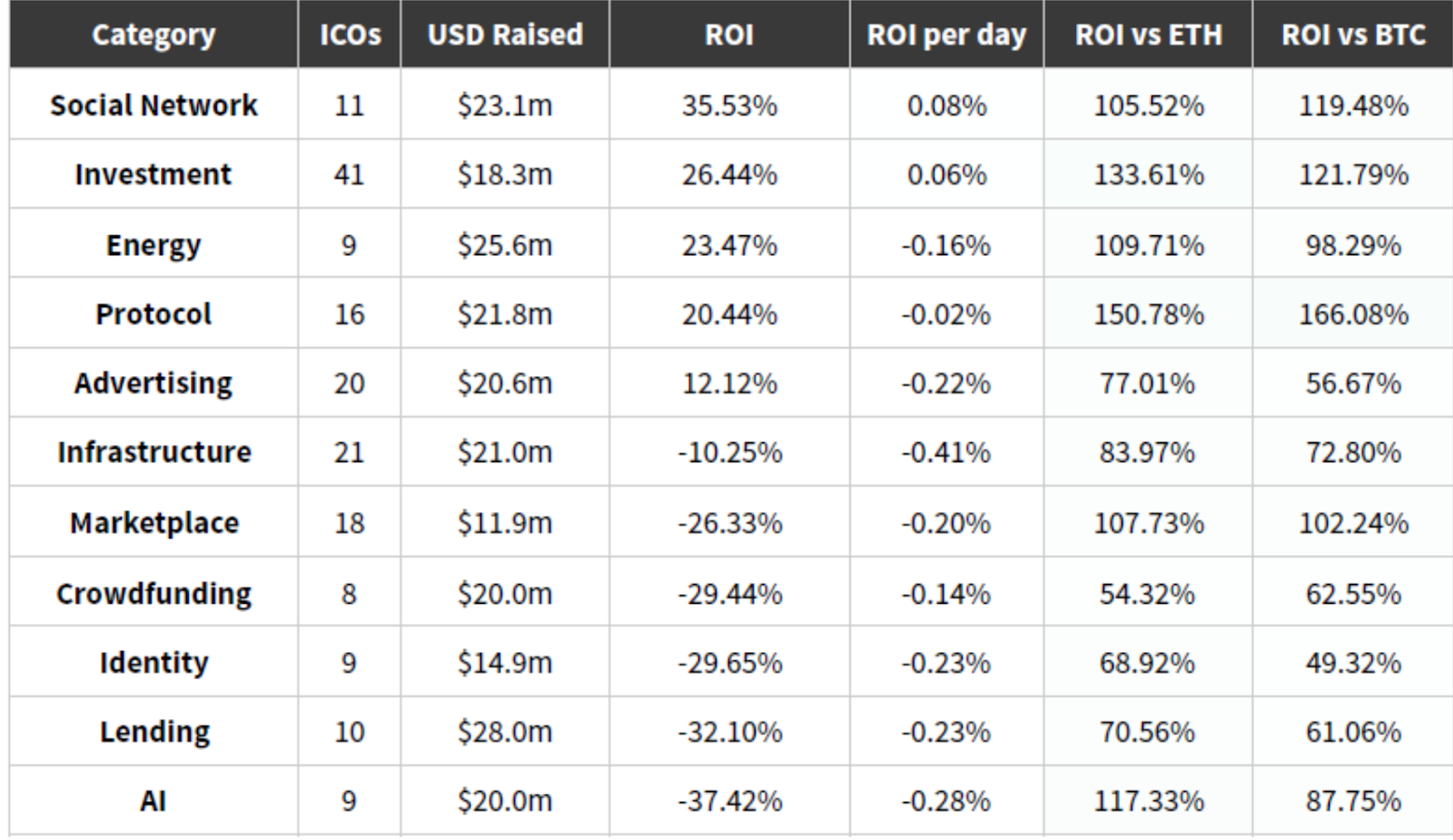 There is a clear decline in ROI per day as each quarter passes. From a peak of 145.7% per day in 2014–2015 to now -0.97% in Q3 2018. Perhaps more importantly, ICO investment increased linearly even as ICO returns declined up to Q1 2018. Q2 2018 was the first month with a significant drop off in total capital flowing into ICOs, and Q3 looking also performing poorly. ICOs may be losing traction as an investment class for a variety of reasons (e.g. decline in returns, manipulation, and increased regulation), and total capital flows aligns with this. It is likely that as Ethereum or the total crypto market capitalization begins ascending again that greater capital flows into ICO projects will return.

What Does It All Mean?

Investment into the blockchain space is positive as it provides the capital required to drive innovation. The companies receiving investment from the ICOs or other fundraising means (e.g. traditional equity investments) are still very early stage companies and face the challenges both technical and business related that any new start-up faces. The key issue facing the industry over the next decade is building the infrastructure scalability and emphasizing user experience in order to drive mass adoption. We view the trends in the market as a healthy and normal part of the continual experimentation and evolution of blockchain technology. The industry continues to evolve with technical and real-world achievements being made everyday, all around the world.

At MouseBelt Labs, we provide hands-on acceleration to the world's most innovative blockchain and distributed ledger technology companies and at our sister company, NueValue Capital, we help to bring the capital required to drive innovation. Thanks again to Estoteric.Capital for providing us the data.

While this post only speaks to the historical trends and patterns associated with the publicly traded token market, there are many more trends and factors influencing the space that we cover in our other blog posts - security tokens, equity investments, blockchain vs. centralized databases. Stay tuned for more blog posts!