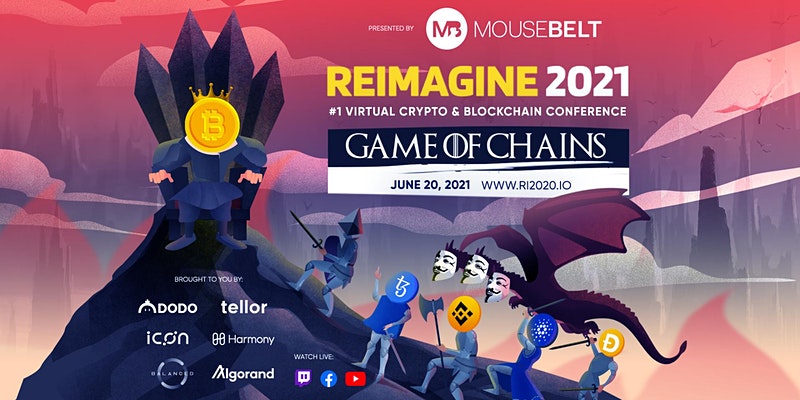 MouseBelt Blockchain Accelerator — an ecosystem supporting students and startups in the blockchain industry, along with sponsors Balanced, ICON, Harmony, DODO, Tellor, and Algorand announced today they will be releasing version 9.0 of their virtual conference series REIMAGINE 2021, on June 20. The theme for our 9th installment is “Game of Chains.” Recently, some of the largest cryptocurrencies on the market have come under fire for their many inefficiencies. Industry leaders and students alike will try to answer the question: who will be the next big crypto? While Bitcoin and Ethereum have their critics, “third-wave” blockchains use something called “proof of stake” or other consensus mechanisms instead of “proof of work.” With Ethereum 2.0 on the way, set to supposedly solve all of its predecessor’s problems. There are other coins on the way that may yet steal the show. Who will sit atop the coin throne? The future is almost here — and REIMAGINE 2021 V9.0 is here to help usher it along.

The newest series will feature all-new content produced with the support of the Blockchain Education Alliance partners — a network of industry leaders committed to supporting blockchain education and research and universities and beyond. New speakers include leaders at the forefront of the coming “third wave” of cryptocurrencies such as Anatoly Yakovenko, CEO Solana, Arthur Breitman, Co-founder of Tezos, Kevin Wang, Co-founder of Nervos, Evan Kuo, CEO of Ampleforth, and more! Returning guests include powerhouses such as Mark Yusko of Morgan Creek Capital, Bruce Fenton of Chainstone Labs.

“As blockchain continues to grow in reach and scale, we at MouseBelt are seeing a lot of attention given to problems with current cryptocurrencies, like scaling issues, high energy usage and gas fees. Now more than ever, the cryptocurrency community is asking, ‘Where are the alternatives?’ We’re thrilled to get to highlight all of the amazing up-and-coming third generation blockchains with our latest conference,” -- Ashlie Meredith, Head of Education at MouseBelt and Co-Director of REIMAGINE 2021.

The decision to launch a virtual conference series comes after MouseBelt’s years of experience offering remote acceleration, educational, and event services. Most recently, MouseBelt launched a free, virtual, Startup School to provide founders of very early stage projects with the knowledge and skills necessary to prepare for investment or placement in accelerator programs at MouseBelt and beyond. The virtual conference and networking event is designed to connect blockchain talent to infrastructure and industry. The goal is to welcome enthusiasts far and near to share their experiences and education. The team hopes these stories can serve as both entertainment and advice for the students and professionals alike tuning in.

The previous seven events in the REIMAGINE series have featured over 450 interviews with 400 hours of content from speakers in 22 countries.

About MouseBelt
MouseBelt is an ecosystem promoting blockchain innovation by supporting hands-on development of the emerging projects and leaders in the industry. The leaders they support are:
Startups — MouseBelt accelerator supports early-stage companies with capital and in-kind investments;
Builders — MouseBelt Engineering supports developers and projects with open-source tools and a development shop; and
Community — its media and university projects encourage newcomers to get involved with blockchain.

MouseBelt is an ecosystem promoting blockchain innovation by supporting hands-on development of the emerging projects and leaders in the industry. Startups. Builders. Community.
Previous Post